The fans made the stadium tremble as they watched the game on eight giant screens.
In the minutes before kick-off, the giant scoreboards at the Santiago Bernabéu displayed the slogan "Let's go for the 12th". And 90 minutes later, the 12th European Cup has arrived as the Whites' stadium was packed to the rafters as the fans lived another historic night for Real Madrid, for European football and for the sport worldwide. The Kings of Europe have got their hands on the trophy for yet another season.

They did so with the support of almost 80,000 fans of all ages who added their voices to those who had travelled to Cardiff and cheered as if they were there in the Welsh capital. Indeed, they were there to get behind their team. Not even the 2000km between them and the scene of the final could quell the enthusiasm of the supporters in the Bernabéu. It was just another match day, but with one twist - eight giant screens took the place of the 22 players on the pitch.

Pandemonium as the first goes in
The fans were in fine voice before the game, singing the anthem of La Décima, chanting the names of the starting eleven and supporting the team from the off. The Bernabéu went crazy when Ronaldo scored the first goal in the 20th minute. The fans celebrated and chanted the Portuguese star’s name, while imitating his famous goal celebration. Not even Juventus’ sublime goal dampened the madridistas’ spirit, as they sang “Madrid, Madrid” to spur on the players over in Cardiff. They could surely hear the chants from over there. 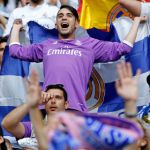