The squad, coaching staff and the Board of Directors all visited the Community of Madrid headquarters and the Town Hall.
Real Madrid have shared their historic twelfth European Cup with the fans. One day on from clinching the title in Cardiff, the squad and coaching staff, accompanied by Florentino Pérez and the Board of Directors, made their way to the Madrid Community headquarters and the Town Hall to present the trophy. The team departed from the Santiago Bernabéu and were joined by thousands of fans who lined the city's streets to celebrate the feat. The Champions League trophy of course took centre stage.

First stop was the Real Casa de Correos, headquarters of the Community of Madrid. The event began with a minute's silence in tribute to victims of terrorism. The president, Cristina Cifuentes, congratulated the team: “Just two weeks after winning LaLiga, you're back at the home of every madrileño. This Duodécima has seen this team become completely triumphant. Thank you for everything, for giving us so much. You were already the best team in the world and today you are even more so. You've won one of every five European Cups. You're the first team to win two consecutive Champions Leagues and I'm sure there's going to be a third because you're capable of anything”.

Florentino Pérez: "Real Madrid have made history yet again”
“Here it is, president, the twelfth European Cup for all the citizens of this Community. These players promised to give their all to be back here, and yesterday they gave everything they had. Real Madrid have made history yet again. It's a real story, that some would say is just unbelievable. This is what we do and this is what we are: the best club in history. A club who never knows when they're beaten and who live obsessed with winning. This squad is ensuring we experience one of the greatest eras at our club”.

There was an exchange of gifts at the event. Florentino Pérez and Sergio Ramos presented Cristina Cifuentes with a replica of the Duodécima trophy and two Real Madrid jerseys. The president of the Community of Madrid reciprocated by handing over a commemorative plaque.

The Whites' party then made their way to the Palacio de Cibeles, headquarters of the Town Council, where there was another exchange of gifts. The mayor, Manuela Carmena, received a replica of the cup and a Whites shirt and gave the team chocolate medals. “You are a legendary team. You're the best team in the world right now and you're from Madrid. Thank you for everything. Yesterday you demonstrated what you are, a wonderful team. Madrid is with you”, she said.

Florentino Pérez: “These players will have legendary status”
“We've shown once again that with our commitment and fighting spirit we can achieve great things, no matter how unrealistic or impossible they may seem. These players are the best in the world. They will go down in the legend of Real Madrid and of football. Zidane has become the only coach to win two Champions Leagues in a row. He's now the best coach in the world and also a symbol because he represents the values of Real Madrid”.

Ramos: “We hope to come back with more titles next year”
“Every time we come back here it's a good sign. It's an honour to be the captain and to represent this wonderful team led by Zidane. We hope to be back here many times next year and celebrating more title wins. Hala Madrid!”, said the captain, who, alongside his teammates, presented the Champions League trophy to the fans from the balcony of the Palacio de Cibeles. 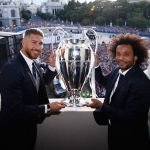