The mayoress, Manuela Carmena, welcomed the team and congratulated them: "Since you are so amazing, we didn’t expect anything less from you, we were hoping you would win. We love you, it’s an honour for Madrid to have this team".

Florentino Pérez: "We’re proud to win this league title"
"Thank you very much for your affection and for welcoming us to share this triumph in the home of all the people of Madrid and in front of all our friends the madridistas. This is our 33rd league title, no one has more, and we are proud to have achieved it together and united. This team has shown that it is the best in terms of the unity and mutual understanding, and with a relentless enthusiasm from the fans that has spurred us on from the first minute to the last. This is part of the formula that has helped us to achieve one of the great challenges of this year".

"I want to thank these amazing players who are already part of the history of this club. The titles for Real Madrid are not a goal but a motivation to take on new challenges. This team has demonstrated once again that it knows very well the values ​​of this club. We’re dreaming of returning again on 4 June to share the joy of another title".

"These players and coaches are going to leave their souls as the go in search of what would be our twelfth European Cup. Thank you, Zizou, for all that you have given us and continue to give us. Your assistants and your staff have made history again paying brilliant football".

Ramos: "It is a pride to fly the flag for this team"
"It has been a league that we’ve had to work hard for but we have shown a lot of consistency, thank you for welcoming us here once again, this trophy is for all of madridismo".

After the speeches there was an exchange of gifts. Florentino Pérez gave the mayoress a replica of the league trophy and two Real Madrid shirts, one of which was signed by the squad. Manuel Carmena responded by giving the Whites chocolate medals with Cibeles on them.

The Community of Madrid
The champions then travelled to the Real Casa de Correos, head offices of The Community of Madrid. Before the speeches began, a commemorative video was projected. As at the Town Hall, there was an exchange of gifts. Florentino Perez presented a replica of the league trophy and two Real Madrid shirts, one of them signed by the squad, while the president Cristina Cifuentes responded with a commemorative plaque.

Ramos: "I hope we can celebrate many more titles with you"
"This title is very much deserved, it has taken a lot of hard work, but winning the league after five years was very important. We still have another dream to fulfil. Thanks to the fans for their affection and support for the team on a world-wide level. Hopefully we can give you many more titles over the coming years".

"This squad of great players and our incredible coach have had a formidable season. A group that has had the fans at their side at all times, supporting the team when they needed it most, like yesterday in Malaga, and from here we appreciate that strength. Real Madrid are going through one of the great moments of the club’s history".

Cristina Cifuentes: "You are a team of champions"
"This is your home and we open the doors with a lot of affection because we are celebrating a very important new triumph for who undoubtedly is the best team in the world, Real Madrid. It was exciting, we had to wait until the last day to be able to celebrate this league, number 33, but we did not doubt that you would win it because you have been fighting until the last minute. It is a prize for consistency and good football. That's why you are a team of champions".

The most anticipated moment was when the players, after leaving their autograph in the book of signatures, went out on to the balcony of the Real Casa de Correos to greet the Madridistas who packed the Puerta del Sol. 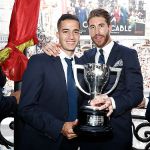