A Ronaldo double capped a superb second-half display from Madrid in their first-leg encounter against Bayern, with the tie now to be decided at the Bernabéu on Tuesday.
Allianz Arena

2
Real Madrid ran out deserved winners in Munich to take command of their quarter-final tie against Bayern. The Whites' victory came courtesy of a sublime second-half display, in which Cristiano Ronaldo netted both of the visitors' goals and played an instrumental role in the comeback. The Madrid win could have been all the more handsome had the madridistas not found Manuel Neuer in such inspired form.

Barring an opening five minutes of concerted pressure from the Germans, Real Madrid looked very comfortable and their game plan was evident until the halfway point of the opening period. Indeed, by that stage it was the visitors who had fashioned the game's clearest opening. On 18 minutes, Toni Kroos's cross found the head of Karim Benzema, with Neuer managing to get the faintest of touches to push the ball onto the crossbar and deny the Whites from drawing first blood. The visitors were dominating proceedings, but a rare Bayern chance saw the hosts get their noses in front. Thiago whipped a corner over on 25' and Arturo Vidal produced a towering header which got the better of Keylor Navas.

Chances at both ends
Madrid were tasked with having to come from behind and although no further goals were forthcoming before the interval, there was still time for more goalmouth action before the half was up. The first chance went the way of Bayern, when Arjen Robben picked out Vidal with a cross, who contrived to head over at the far post. Two minutes later, Cristiano Ronaldo looked to hit back, but his effort from the edge of the area was pushed behind by Neuer. Following the corner, Kroos picked the ball up on the angle and his strike whistled just inches wide of the hosts' goal. Right on 45', Rizzoli pointed to the spot after a Franck Ribéry effort struck Dani Carvajal on the chest. The resulting spot-kick saw Vidal blaze his effort over the bar.

The second half could not have got off to a better start. Real Madrid somehow managed to equalise within the first two minutes. Casemiro passed to Carvajal, who then crossed for Cristiano Ronaldo, who was patiently waiting at the penalty spot to poke home past Neuer. The game then took a dramatic twist in the 56th minute. Luka Modric sent in a ludicrous cross from the right and Gareth Bale smashed in a header only to be brilliantly denied by Neuer.

Javi Martínez sent off
The minutes went by and Real Madrid grew ever stronger at the Allianz Arena. They were all over the ball and from the 61st minute onwards had a man advantage after Javi Martínez was sent off for a second yellow. The visitors had more and more chances, with Ramos seeing his free-kick fly just over just five minutes later from the edge of the box.

The game went back and forth from then onwards and Real Madrid were insurmountable in their dominance. Marco Asensio, who came on for Bale, crossed in the 71st minute and it was Benzema who sent in a header which went over the bar. Three minutes later it was Asensio who struck from the edge of the box and Neuer smothered the ball. Neuer totally repelled the Whites’ many efforts while they were on top. The German shone yet again against Cristiano Ronaldo in the 75th minute.

Cristiano Ronaldo seals victory
The winning goal came in the 77th minute. Asensio looped in a cross and Cristiano Ronaldo was clever enough to beat the home defender and poke the ball beyond Neuer. The Whites had snuck in front and looked to get a third goal in order to go into the next leg with even more breathing space. They came close with a volley from Marcelo in the 80th minute, which he blasted wide and then in extra time Ramos struck with a header which was ruled out for offside. This was a richly deserved win for Real Madrid. The tie will be concluded next Tuesday at the Bernabéu. 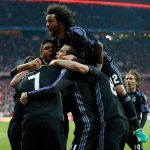