Marcelo's brace and a stunning goal from Mariano gave the Whites the win in their second pre-season game.

2
Real Madrid notched a deserved win in their second pre-season game. The Whites beat Chelsea, who were playing their fourth game, and showed signs of progression ahead of the new season, which starts on the 9th August with the UEFA Super Cup. The first half was a master class from Real Madrid, who scored three and could have had more.

The first two were works from Marcelo, who was inspired and named the game's MVP. The first came at the 19’ minute. The Brazilian received the ball slightly off balance on the edge of the area, beat two players and shot with his right leaving Begovic helpless. The second goal came seven minutes later. Marcelo combined with Marco Asensio, he burst into the area and finished with aplomb.

The scoreboard read in favour of the Whites but the Match's work of art was yet to come. Youth-teamer Mariano sealed the deal. The Dominican International player received Marcelo's ball and without time to react had the crowd on their feet with a shot from 30 metres leaving Begovic with no chance in the 37’ minute.

Hazard reduces the deficit
Neither side dominated in the second half. Real Madrid, who were barely troubled and made 8 changes in the 63’ minute, maintained their advantage as they had done at the end of the first half. In the 80’ minute and in extra time, Chelsea reduced the deficit with a brace from Hazard. That was how the game would end. In the early hours between Wednesday night and Thursday morning, comes the next test against Bayern Munich. 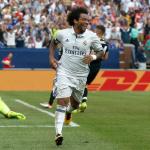