Sergio Ramos, with a bicycle kick, and James scored the goals for Madrid, who were beaten for the first time this season.
Sánchez Pizjuán

2
Real Madrid's unbeaten run came to an end in the Sánchez Pizjuán, even though the team went out to show their credentials from the very beginning. By applying suffocating pressure on the opposition and knocking the ball around quickly, the Whites gave Sevilla a scare early on. Pepe lifted his head up in the 10th minute and sent a pinpoint diagonal pass to Cristiano Ronaldo. The Portuguese talisman controlled the ball but his shot was sent out for a corner by one of the home side's defenders. Kroos took the resulting corner which fell at the feet of Nacho, who from the edge of the box struck a left-footed volley that came off the post before flying across the goal line.

That was just a warning shot, and Madrid's dominance on the pitch was eventually reflected on the scoreboard in the 22nd minute. The opening goal was a work of art, perhaps even the pick of the weekend. Isco swung in a corner and, before the ball could touch the ground, Ramos conjured up a masterful bicycle kick, which Sergio Rico was powerless to keep out. The Real Madrid captain injured himself landing and had to be replaced by Varane in the 32nd minute. Before the substitution though, the visitors could have doubled their lead. Bale was behind the move, getting the ball, quickly breaking away from two defenders and then shooting on goal, only for the home side's keeper to send his effort out for another corner in the 24th minute.

Sevilla turn things around on the scoreboard
The score was to change before half time. Sevilla equalised from a corner that flew across the goal line before being tapped in by Immobile in the 36th minute. It would all be to play for in the second half, which Real Madrid started with more link-up play and with a lot more movement. Despite the improvement, the home team went ahead following an individual bit of play from Konoplyanka in the 61st minute, which was finished off by Banega.

A comeback from behind was now needed. Benítez brought on James for Isco in the 63rd minute and Madrid contained Sevilla in their own half. The Whites were bearing down on Sevilla's final third more and more frequently and it looked like it would only be a matter of time before they levelled matters. It could have been all square in the 73rd minute. James took a corner and Casemiro's header forced Rico into pulling off a formidable save at full stretch. A counter attack a minute later saw the Andalusians extend their lead through Fernando Llorente. James narrowed the gap in the 92nd minute with a powerful strike from outside the box but there wasn't enough time for any more. There will now be an international break. 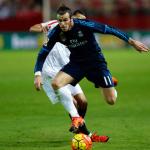