Built in 1897, PSG's home stadium is currently undergoing a process of renovation for the 2016 European Championship.
Real Madrid take on Paris Saint-Germain in a competitive fixture at the Parc des Princes for the third time in their history. The Whites will walk out into a stadium much changed from their previous visit. Indeed, the arena, which was constructed in 1897, is currently in the midst of a process of renovation ahead of the 2016 European Championship in France, for which it is one of the venues.

The remodelling of the stadium, which has a capacity of close to 50,000, sees the creation of two extra rows of seating closer to the pitch, the installation of new substitutes' benches and spacious, modern changing rooms that include warm-up and treatment rooms. The playing surface, of natural grass and featuring undersoil heating, has been reinforced with artificial strands sewn into the turf to provide a faster, more even and more resistant pitch.

A ‘caisse de résonnance’
Described in French as a 'caisse de résonnance' ('box of sound') due to its tight dimensions and the pressure-cooker atmosphere created by its home fans, it is one of the continent's most emblematic and historic venues. Its name is directly linked to the past of the surrounding area, forested land used for hunting by King Louis Philippe I of France.

The ground, which featured a cycling track until the end of the 1960s, was the finishing line for the final stage of the Tour de France from its first edition in 1903 until 1967. The Tour is not the only major sporting event that has been hosted at this stadium. It was the venue for several matches at the 1938 and 1998 World Cups and the 1960, 1964 and 1984 European Championships, not to mention the 2007 Rugby World Cup.

The first ever European Cup
During the First World War, the Parc des Princes even witnessed American football games held by US troops posted to France. For Real Madrid supporters, however, it will always be remembered as the scene of the first ever European Cup final, which saw the Whites defeat Stade Reims 4-3. Before the opening of the Stade de France in 1998, it was the home stadium of the French football and rugby national teams.

Racing Club Paris and PSG
In all this time, just two resident football clubs have occupied the ground, which is owned by Paris' city council. At the beginning of the 20th century, this privilege was enjoyed by Racing Club Paris, while Paris Saint-Germain have been its incumbents since 1974. 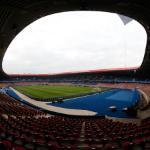