The Whites, who remain unbeaten during the preseason, beat Tottenham Hotspur and will now take on Bayern Munich to decide the trophy.
Allianz Arena

0
Real Madrid are continuing to shine during the preseason. In what was their first friendly game in Europe, the Whites beat Tottenham Hotspur 2-0 in the semi-final of the Audi Cup thanks to goals from James and Bale. Rafa Benítez's team put in a very strong performance in which they looked extremely solid at the back and dangerous in going forward. Unbeaten so far this summer, the Real Madrid players will now be looking to win this prestigious trophy on Wednesday when they take on Bayern Munich.

The match got off to a blistering start with both sides applying pressure up top and trying to get control over the ball. Indeed, before 5 minutes had passed there had already been goalscoring opportunities at both ends. Lamela threatened first for the English outfit and then Jesé hit back with a chance of his own through a great shot that riffled off the crossbar and then with another that Vorm managed to keep out. The game was extremely lively, much to the delight of the crowd in the Allianz Arena.

Control of the game
As the minutes ticked by Benítez's team began to take charge of the encounter. However, Tottenham remained in the game and, in the 13th minute, a long-range Eriksen effort forced a save from Casilla, who was making his first appearance in the starting line-up. Bit by bit, the Real Madrid midfielders started taking centre stage, which resulted in goalscoring chances.

The Colombian, who was the man of the match, led the Whites' attack, first trying his luck from outside the box and then whipping in a free kick that Bale headed towards goal. In the 35th minute, Modric came close to catching out Vorm, who reacted in time to keep the ball out following a deflection off of Wimmer. That preceded the opening goal by one minute. Isco feinted on the left wing before sending in a cross towards the head of James, who made it 1-0 and ensured a lead on the scoreboard at half time.

The goalscorer and Kroos stayed in the dressing room after the break and were replaced by Lucas Vázquez and Casemiro. There were fewer chances after the restart and the pace of the game dropped somewhat. Some of this was owing to the usual second half substitutions as well as stoppages in play. In the 61st minute, Eriksen attempted to beat a rock solid Casilla once again.

Bale finishes off the job
Among the new members of the squad Benítez included, Asensio and Borja Mayoral's debuts stood out. Real Madrid, now in control of the game, looked to kill things off. And Bale made sure that was what happened. He stole the ball in the 79th minute, dribbled a few yards and struck a low left footer from outside the box to make it 2-0. The Welshman came off to the applause of the crowd soon afterwards. Real Madrid will be in search of their third trophy of the preseason on Wednesday. 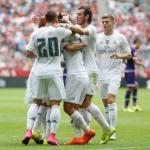