1
Real Madrid were beaten in the Juventus Stadium but managed to get a goal that could prove crucial in the return leg of a wide-open tie that will be decided in the Bernabéu. It became an uphill battle very early on. Tévez received the ball between midfield and defence before launching a shot on goal in the 8’. Casillas got a hand to the strike but Morata made the most of the loose ball to put the home side in front. A comeback was needed and Real Madrid started to look more threatening after the setback.

The Whites had four chances on goal before grabbing an equaliser in the 27’. The clearest scoring opportunities came through Kroos, with a long-range shot from outside the box in the 12’, and Cristiano Ronaldo, with a left-footed effort in the 23’. The Portuguese star did not let the next chance that came his way go to waste. The move began on the right wing. Carvajal linked up with James in the 27’ and the Colombian improvised a right-footed pass that flew over Buffon and found Cristiano Ronaldo in the goal mouth to nod the ball into the back of the net with ease.

It was with the score level that the Whites held the upper hand in the tie. The visitors grew stronger as the minutes ticked by and could have even been ahead at the half time break had James not hit the crossbar in the 41’. Isco overlapped with Marcelo, whipped in an inviting cross with his left but the Colombian's resulting header came crashing off the upright.

The home side's second goal
While Real Madrid's first half got underway with an early conceded goal, the second also got off to a poor start in defence. Tévez was brought down inside the box by Carvajal following a counterattack that began with Juventus latching onto a rebound. The Argentine scored the resulting penalty in the 57’ to put his team ahead. Nothing was going right for Real Madrid. Ancelotti brought on Chicharito for Isco six minutes later. The Whites showed more bite up front and came close to getting a second in the 63’. James got a slight touch on a Ramos volley from outside the box but Cristiano Ronaldo was just a few millimetres away from getting on the end of the makeshift pass right in front of goal.

Persistence from the visitors
Real Madrid started to control the ball once again and the hosts sat deep in an attempt to defend their lead. The last quarter of an hour was a constant wave of pressure from the away team, but Juventus knew how to hold onto their advantage in a thrilling encounter. The semi-final is still wide open and will be decided in the Bernabéu in 8 days time. Another magical night of European football is expected. 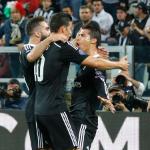