The squad, the technical staff and the board visited the headquarters of the Community of Madrid and the Town Hall.
Real Madrid shared their 25th Copa del Rey title, won in Gran Canaria against Barcelona, to the people of Madrid. The Whites, accompanied by Florentino Pérez and various members of the board, were first welcomed in the headquarters of the Community of Madrid by Ignacio González and, following that, by Ana Botella in the Town Hall.

While in the Community of Madrid's headquarters, Ignacio González presented a commemorative plague to the Real Madrid president, who in turn presented him with a replica of the Copa. Felipe Reyes gave the president of the Community of Madrid a jersey signed by the whole team. After a few words from the Madrid captain, it was Florentino Pérez's turn to speak: "We are hear to share in the delight of this new title. It is the fruit of talent, hard work and this squad's commitment".

"These titles add to an already legendary trophy cabinet. Nothing defines us better than the fight to win. And that was evident yesterday during the last few minutes of the game. This team represents the Real Madrid values; they represent pride and class”.

Thanks
“I would like to thank Pablo Laso, the technical staff and the squad for their work and, above all else, I would like to publically thank Juan Carlos Sánchez for his love of basketball as well as Alberto Herreros. As Laso says, winning makes you work better and now the big challenge is to continue working and to win the Euroleague so we can come back here and celebrate with the Real Madrid fans”.

Ignacio González: “An honour to have this team”
“It brings me enormous satisfaction to have you here once again and to do so in order to celebrate another title win. This is the second Copa del Rey in a row. You could be forgiven for thinking this was easy. But this is the first time it has been achieved in 29 years. It is an honour for us to have a team successfully flying the flag for Madrid all over Spain. We hope to have you here again for the League title and, above all else, we hope you are able to reach the Euroleague final and win it”.

Afterwards, the Madrid delegation made their way to the Town Hall, where the mayoress Ana Botella stated: “It is delightful to have you in the home of every Madrid citizen. We are proud of your victory after an intense weekend of action in Gran Canaria. Three Copa del Reys, three Super Cups and a League title in the space of four years. I give you my most sincere congratulations".

"I have to ask one last effort from you with regards the Euroleague, a competition that seems to have alluded you. I'm certain that with the class you have shown you can do it. Your achievements feel like ours”.

Florentino Pérez: “A title is always a great honour”
“On behalf of Real Madrid, I thank you for having us in the home of the citizens of Madrid. In a few days time Real Madrid will turn 113-years-old. We have created a legend during this time with a set of values that have become the driving force behind our institution”.

Dedication and sacrifice
“Unwavering principles like those represented by this team of champions, who know that talent is fundamental, but so too are dedication, sacrifice and the unity created with team-mates". 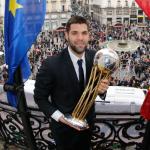