The Whites, who dominated the game and deserved to score against Atlético, will play for their passage to the Copa quarter-finals on Thursday 15.
Vicente Calderón
2
0
Last year's Champions League finalists faced off in a Copa del Rey knock out tie for a second season in a row. Luck was not with Real Madrid, who dominated the game from the beginning but conceded two goals against the run of play on two occasions during the second half. The first came through a penalty that was blown for during a throw in, while the second was scored from a corner kick.

The Whites deserved a lot more for their first half performance. They controlled the ball and also had the clearest chances. In fact they were close to opening up the scoring in the first minute of the first leg clash. James swung in a corner which Ramos met with his head in the penalty area, but Oblak produced a fine save. Real Madrid scored twelve minutes later with Bale getting his head onto a James free kick, but the goal was disallowed as the Welshman was offside.

Another chance
The tempo of the match began to ease off from that point on and the Whites' next chance did not come until the 39’, the last goalscoring opportunity before the half-time break. It was a Benzema shot from outside the box that Oblak was able to smother.

Marcelo played a ball over the defence in the 52’ which found Bale, who hit the ball first time with a right-footed volley that almost got the rojiblanco goalkeeper off guard. Things were made difficult against the run of play when Raúl García was knocked to the floor in the box during a throw in and was then able to beat Navas with the resulting penalty kick in the 57’.

Ancelotti decided to bring on Cristiano Ronaldo for James five minutes later, but things were complicated even more in the 76’. A Gabi corner was headed in by Giménez. The Whites looked for a way back into the game until the final whistle, but did not have the rub of the green in front of goal. A comeback is required in the Bernabéu. 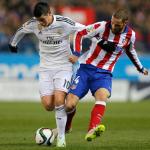