Two goals from Cristiano Ronaldo, the first following a sensational move from Benzema, and another from Bale, sealed the goal fest in Getafe.
Coliseum Alfonso Pérez

3
Real Madrid hold onto their strong grip at the top of La Liga. The Whites thrashed Getafe in a match that was decided in the second half. Indeed, the first 45 ended scoreless despite Madrid's complete dominance against a defensively solid outfit, which had only already played Barcelona and Atlético at home this season, conceding only one goal over both those games.

It was not a case of lacking opportunities. The Whites had various chances to score but failed to due to a shortage of luck and Getafe's tremendous work at the back. The latter happened one minute before the 30' of play.

It was a great piece of individual play from Benzema, who feinted on the back line, left the defender on the ground and crossed back in. James' free shot from the penalty spot was cleared for a corner by Roberto Lago. The last move of the first half was even clearer. Kroos' shot, a free ball hit from the edge of the area with his left foot, hit the bar.

Whilst the bar prevented Madrid from breaking the deadlock at the end of the first half, it was Codina who did well to keep them out at the start of the second. The move deserved better. Isco got away from an opponent, he combined with James in the 53', who passed through the defence but Benzema was unable to take advantage in the one-on-one. Four minutes later, the Colombian had the chance, but the home goalkeeper twice stopped his shots from the edge of the area.

Benzema's work of art
The leaders' siege grew more intense as the minutes ticked on and it was only a question of time before the Whites scored. And that is how it was to be. The goal was scored by Cristiano Ronaldo, but the amazing move was created by Benzema. The French player's move in the 65' was reminiscent of the masterpiece that Butragueño left for posterity against Cádiz.

Benzema got the ball as he was leaning over, he pretended to cross to get away from the first opponent, and without losing sight of the fact the Portuguese player was unmarked, he managed to keep control of the ball on the by-line in order to trick the second home defender by stepping on the ball with his right foot before assisting with his left.

The killer blow
They had done the most difficult part, but this Real Madrid side do not simply sit back, and four minutes later they killed off the game. Bale finished off a textbook counter-attacking move following a measured James assist coming from the left wing.

It was not to be the last goal from the visitors. Cristiano Ronaldo finished off the thrashing in the 79'. Once again, James provided the assist and the Portuguese player headed the ball into the net from the penalty spot. The Whites, who kept a clean sheet, ended the first half of the season as leaders and with a game in hand. 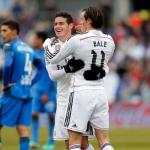