There was a lot of reminiscing during the meal. With the unforgettable final in Lisbon still fresh in the memory, everyone showed their confidence in the team carrying the successes of last year onwards and that more titles would be won this season. Florentino Pérez went from table to table to thank the members for their dedication and loyalty. To conclude the ceremony, the now traditional group photo was taken in the Santiago Bernabéu's presidential box. 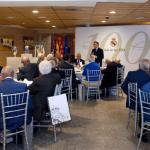