His debut for Real Madrid came on 29 August 2009 against Deportivo and he scored his first goal for the club on 20 September of that year in the Santiago Bernabéu against Xerez. His stats improved considerably in the first few years until he scored 32 goals in the 2011/12 season, his best haul so far.

Twenty-four goals in the Décima season
Last year, Benzema was key to the conquest of the Champions League and the Copa del Rey. Together with Cristiano and Bale, he formed the best attacking trio in Europe. The Frenchman played in 52 matches and found the net 24 times; five of them en route to the Décima and two in winning the club’s nineteenth Copa del Rey.

Besides his goals, Benzema is one of the best link-up players. He has exquisite technique and is capable of looking up just at the right moment to find his best-placed teammate. As a result he finishes each season as one of the team’s most prolific providers. 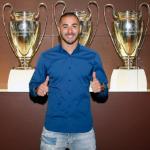