A Ramos header and a wonder back heel by Cristiano Ronaldo earns the Whites a draw against a Valencia side that took the lead on two occasions.

2
Real Madrid managed to earn another point in their bid to win La Liga, although few would have expected anything other than a victory after their promising start to the game. In fact the Whites could have gone ahead as early as the third minute when Cristiano Ronaldo linked up with Bale before firing a shot from the edge of the area. However, Diego Alves was able to prevent it from going in. Benzema also had a good chance in the 7th minute, but his header went agonisingly wide. The Europa League semi-finalists reacted and began testing Diego López's reactions in the 16th minute, when a Feghouli cross was met by Parejo's head only for the Whites' keeper to touch the ball onto the crossbar.

Real Madrid controlled possession and pushed high up the pitch with the ball. Cristiano Ronaldo had another effort, but once again he was denied by Alves, who was excellent during the first half, in which he managed to frustrate the Portuguese in the 26th and 41st minutes respectively. The home side was punished for failing to take its chances in the 44th minute, when a Parejo corner found its way to Mathieu, who headed home from inside the six-yard box. A comeback was needed in the second half.

Di María came on for Illarra after the break. Ancelotti's gamble up front was seemed to pay off, and Alcácer's header in the 52th minute, which forced the best out of Diego López, was then followed by wave after wave of pressure from the home team. Alves had to work overtime and was at hand to deny Di María, Isco and Cristiano Ronaldo yet again, with the latter trying his luck with a volley. However, the Valencia keeper could do nothing to stop the equaliser in the 59th minute. A Di María corner was met by a rising Cristiano Ronaldo who managed to head the ball across to Ramos - a specialist from dead ball situations - who scored his third goal in his last two games.

Persistent in attack
The Whites' joy was short lived though when, against the run of play, Parejo retook the lead for the visitors in the 65th minute. Now there were only 25 minutes left in which to score two goals. Real Madrid kept applying pressure but Alves wouldn't concede. The Valencia keeper was excellent but in the end was helpless to stop what happened in extra time. Di María crossed the ball in and then a bit of ingenuity conjured up by Cristiano Ronaldo somehow earned the home side a valuable point. With his back to goal, the Portuguese back-heeled the ball into the back of the net in the 92nd minute, a goal which keeps Real Madrid in the La Liga title race. 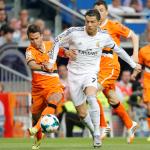