The Whites continue their preparations in the Ciudad Real Madrid ahead of the first leg tie against Bayern Munich in the semifinals of the Champions League.

Real Madrid had their first training session of the week and continued their preparations ahead of the first leg in the semifinals of the Champions League, which they will play on Wednesday against Bayern Munich in the Santiago Bernabéu (20:45). Cristiano Ronaldo and Ramos both came through the full training session, which began with Isco being wished a happy birthday. Also taking part in the training session led by Ancelotti were Castilla's Llorente, Burgui and Pablo Felipe. Arbeloa, Jesé and Bale, who has come down with a bout of flu, were the only absentees. 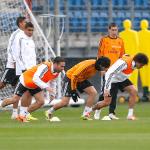