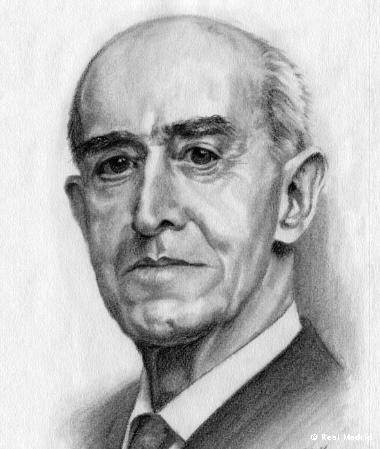 Adolfo Meléndez was linked to Real Madrid right from the very beginning of the club as he was a player, the secretary of the first board of directors and one of the founders of the club in 1902. He was also responsible for the resurgence of the club after the Spanish Civil War when he firstly had to restore Real Madrid’s Chamartín stadium to working order and then build a good team from the ruins of the war. He was successful at both tasks and his presidency of the club is widely considered to have left an outstanding legacy for the future.

During his first period as president (1908/16), the most notable achievement was the inauguration of the new playing field at O’Donnell Street where a stand was built for 200 spectators, the ground itself was enclosed and dressing rooms were provided for the players, which was quite a luxury at that time. The ground was officially opened on the 31st of October 1912 in a match which Real Madrid drew against Real Racing Club Irún.

After the Spanish Civil War, in April 1939 a new board of directors was elected to revive the club and Adolfo Meléndez was named president. He brought together a fine squad of players and on the 22nd of October the club opened its rebuilt stadium with the best possible match and result – a victory in the Madrid derby between Real Madrid and Athletic Aviación Club (who are now called Atlético de Madrid).

After a lifetime devoted to his beloved Real Madrid, on the 27th of November 1940 the club agreed that it was time for a change and Adolfo Meléndez handed over the presidency to Antonio Santos Peralba.