Real Madrid was crowned champions after downing Barcelona at the Palacio in game four of the final series (91-84).
Today marks the fifth anniversay of Real Madrid's 33rd league title. On 22 June 2016, Pablo Laso's men tasted glory after seeing off Barcelona in a 91-84 triumph in the fourth game of the final series. Our team, with home-court advantage against them, was downed in the first game at the Palau, but won the second match-up and the two subsequent games with the fans' backing. In the decisive contest, the standout players were 21-point Llull, Ayón, who posted nine rebounds, and Sergio Rodríguez, who dished out six assists.

In the Regular Season, Real Madrid finished in second place with the same number of victories and defeats at the league winners: 29 wins and five defeats. The Whites faced UCAM Murcia and Valencia Basket in the playoffs. In the final series against Barcelona, Llull landed the MVP gong. The victory saw Laso's charges successfully defend the title captured last time out and end the 2015/16 season with a treble after also claiming the Copa del Rey and the Intercontinental Cup. 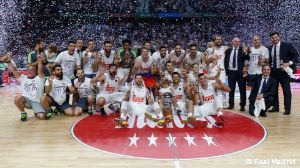