The new Real Madrid man is in the running for the award that recognises the best player aged under 21 in Europe.
Eduardo Camavinga features amongst the 40-strong shortlist for the 2021 Golden Boy, the accolade awarded by Tuttosport to the best under-21 player in European football. The list of nominees will be whittled down each month to reveal the 20 finalists on 15 October. The winner will be announced at the end of autumn.

The prize is awarded on the basis of votes cast by 40 sports journalists from across Europe to the best player registered with a European club who was born since 1 January 2001. Camavinga is one of the new faces in this season's Real Madrid squad and despite his youth, he boasts Champions League experience and has been capped by the senior French national team. He was on target on his madridista debut, which came in the meeting with Celta Vigo. 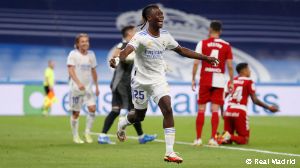