The team play the third and decisive semi-final clash in front of their fans (10:00pm CEST).
With the play-off semi-final level at one win each, Real Madrid are playing for a place in the Endesa League final 2020/21 tonight. The scene is set at the WiZink Center and the fans will be present in the stands for the second time this season. Laso's men will be looking for a repeat of their previous encounters with Valencia at this stage of the competition, having come through to reach the showpiece on all three occasions the two have locked horns in the semis.

It's the big one, winner takes all. Real Madrid hope it will be them, having already played an unprecedented 84 games this season. This is just one more reason, alongside their serious injury issues, that the team's strength in depth is sure to be key. The series so far has been marked by intensity and high-energy basketball. The madridistas ran away with the first clash, before the Valencian team did the same in the second. Reducing Valencia Basket's three-point numbers and matching their aggression will be crucial tonight, as will being on form from 6.75 themselves and retaining control of the rebound.

Previous meetings
Experience is sure to be another key factor tonight, and the madridistas are overflowing with knowledge of these kinds of games - specifically in play-off semi-finals with Valencia Basket. All three times this head-to-head has come about at this stage, our team has made the final (1997/98, 2015/16 and 2017/18). The last winner-takes-all match between the two came this season in the Copa del Rey quarter-finals, which also went the way of the Whites, 85-74. One of the competition's finalists will come out of the WiZink Center tonight. 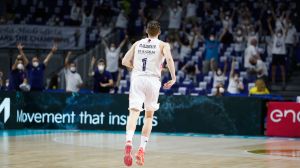