Real Madrid secured glory after claiming a 2-1 win at Osasuna.
Today marks the 13th anniversary of Real Madrid's 31st LaLiga title success. On 4 May 2008, our team mathematically clinched the league honours after running out 2-1 winners over Osasuna in Pamplona on Matchday 35 of the campaign. The madridistas had to come from behind after Puñal's spot-kick put the Navarrans in front on 83. Real Madrid, who had a one-man disadvantage throughout all of the second half, turned the scoreline on its ahead in the final stages, thanks to goals from Arjen Robben and Gonzalo Higuaín to clinch the title.

That squad, coached by Bernd Schuster, ended the 2007/08 LaLiga campaign eight points ahead of second-placed Villarreal. The Whites were the division's top scorers with 84 goals and also boasted the meanest defence (36). In the individual stakes, Iker Casillas landed the Zamora Trophy, whilst Raúl's 18-goal haul saw him top the team's scoring charts. 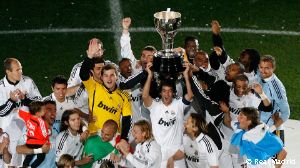