He's the youngest player ever to hit a PIR of 30 in a Euroleague play-off.
It's been a meteoric rise for academy graduate Usman Garuba at Real Madrid in recent times. At just 19 years of age, he's hitting heights only a chosen few can even dream of. The center led an incredible fightback against Anadolu Efes in game four of the Euroleague play-off to record his best performance in a madridista jersey to date with 24 points, 12 rebounds, 1 assist, 1 steal, 1 block, 5 fouls received and a PIR of 30. These record numbers make him the youngest player ever to reach the figure in a knock-out Euroleague game and give him the second-best performance by a Rising Star (under 22 years old).

Without Randolph, out for the season, and with Tavares also missing since the second game of the series, Garuba has stepped up to the fore when Real Madrid needed him most. A quick look at his Regular Season numbers compared to this play-off so far tell you all you need to know. He's gone from averaging 3 points, 3.6 rebounds, 0.7 assists and PIR of 5 in 14.1 minutes, to being on court for 31.2 minutes (Laso's most-used player), posting 12 points, 7.2 rebounds, 1 assist and a PIR of 14.8.

What's more, the academy graduate is also proving a key man in the league, where he was just voted the competition's best young player, having averaged 10.7 points, 7 rebounds and 16.5 PIR in the leaders' last four wins.

Garuba's outstanding performance will go down in Real Madrid and Euroleague history. His PIR of 30 eclipses Doncic's 24 in the 2017-18 campaign and is the best ever by a madridista under 22 years of age in a Euroleague play-off. It's also the second-highest in the competition since this format was in place, behind the 32 posted by Schortsanitis for Olympiacos in 2005-06. Of course, the Madrid man has managed it at just 19 years of age.

The outright record belongs to former madridista Jaric, with a PIR of 40 in the play-offs in 2000-01, but these were two best-of-three knock-out rounds. Garuba had blitzed the numbers of countless huge talents who dominated Europe in their time, including Doncic, Ilyasova, Abrines, Ricky Rubio, Caspi, Velickovic, Saric and Splitter, among others. 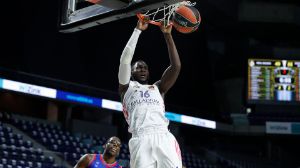