The French defender has recorded 234 wins and scored 17 goals in his time at the club.
Raphaël Varane made his 350th appearance for Real Madrid in Bergamo. The Frenchman reached this milestone in his eleventh season with the club, with whom he has claimed 234 victories and 18 trophies. He is the fifth player in terms of appearances made for the club in the current squad after Sergio Ramos (668), Karim Benzema (541), Marcelo (519) and Luka Modric (374).

Statistics
His most prolific seasons in terms of appearances came in 2014-15 (46) and 2017-18 (44). He netted his first goal against Rayo Vallecano at the Bernabéu on 24 September 2011, and has gone on to strike 17 times to date (eight in LaLiga, seven in the Copa del Rey and two in the Champions League). Varane has been involved in 31 games this term, registering 19 victories and bagging a brace in the win over Huesca at El Alcoraz. 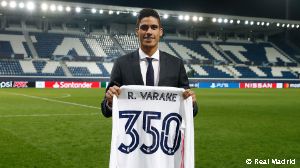