The midfielder racked up his 309 appearance in the meeting with Real Sociedad.
Toni Kroos was a starter in the game against Real Sociedad as he clocked up his 309 appearance in Real Madrid colours. This tally sees him topple Stielike's record as the German player to have made the most appearances in the club's history. Kroos has played a major part in the team’s success ever since the German signed for Real Madrid in the summer of 2014.

Stielike
The legendary German footballer spent eight seasons at Real Madrid (1977-1985) and made a lasting impression on the madridistas. In his 308 games as a Real Madrid player, he scored 50 goals and picked up seven trophies: 1 UEFA Cup, 3 league titles, 2 Copa del Rey trophies and 1 League Cup. He also won a European Championship with the German national team in the 1979/80 season. 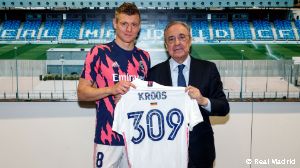