A treble in the space of three minutes from the Swedish striker sealed the spoils for Real Madrid against Valencia.
Ciudad Real Madrid

1
Real Madrid Women keep marching on in the Primera Iberdrola after the Whites overcame Valencia at Real Madrid City to record a third straight win and a 12th triumph of the season. A Kosovare Asllani hat-trick in the space of just three second-half minutes ensured victory for David Aznar's ladies. The visitors later reduced the arreas through Jansen, but the madridistas held out to put another three points on the board and keep themselves amongst the division's frontunners.

With just two minutes on the clock, Cardona tried her luck after having been picked out by a long pass from Corredera, but her effort was off-target. Candela hit back for Valencia with an effort from range that struck the crossbar. The madridistas then began to dominate proceedings and Asllani pounced on a rebound to fire the ball home. However, the goal was wrongly ruled out for offside. Ivana was next to come close, on 22', when she cut inside her marker inside the six-yard box only to be denied by the woodwork. The madridistas continued to pour forward and Maite Oroz fired in an effort from the edge of the area that failed to find the net. The last chance of the first half went the way of Kaci, whose headed effort was kept out by the Valencia custodian.

Asllani strikes
After the restart, the madridistas continued to carve out chances and were duly rewarded with a Asllani hat-trick inside the space of just three minutes. Her opening goal came on 67', when a rasping free-kick from a wide area put the Whites in the ascendancy, despite Jansen's best efforts to clear the danger. In the very next move, the madridista forward picked Jiménez's pocket and chipped the ball over Enith to double the hosts' advantage. Asllani completed her first hat-trick in Real Madrid colours in the 70th minute after converting from Cardona's pass. Jansen pulled a goal back for Valencia to make it 3-1, but Real Madrid held on to the lead to record another win. 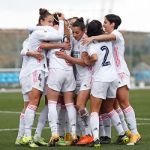