Team to play semi-final at La Rosaleda as they look to reclaim the trophy (Thursday, 9pm CET).
The Spanish Super Cup is upon us once again and the reigning champions, Real Madrid, will be looking to claim their first trophy of the season. For the second consecutive year, there are four teams in the tournament and Zidane's side will have to defeat Athletic Club at La Rosaleda (9pm CET) to reach Sunday's final at La Cartuja. The team faces Barcelona/Real Sociedad, who knocked out Barcelona/Real Sociedad in the other semi-final.

“We're going to have to compete and put on a great performance”, said Zidane in the press conference ahead of the clash. After a turbuelent week in which the team had to travel from Pamplona to Malaga due to the snow storm, the available players are the same as for the game against Osasuna, with the absences of Carvajal, Jović and Rodrygo.

Unprecedented meeting
In spite of being two historic clubs with an extensive League and Cup record, it will be the first time in history that Real Madrid and Athletic play against each other in the Spanish Super Cup. The Basque team has won the competition twice: in 1984 they won it after winning the League and Copa del Rey, while in 2015 they beat Barcelona over two games. Marcelino faces his second match in charge of the Basque side. 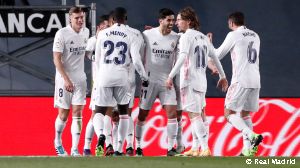