Brahim Díaz is now a Real Madrid player. The 19-year-old midfielder (Málaga, 03/08/1999) joins the club from Manchester City after catching the eye with his direct attacking play, speed with the ball at his feet and his excellent vision. The Whites' new recruit was part of Málaga's academy until he joined the Manchester City youth set-up at the age of 14. Since then, his career has gone from strength to strength. He made his competitive first-team debut for City aged just 17 years and 49 days, against Swansea in the 2016/7 EFL Cup.

It wasn't long before he graced the Champions League, making his debut in the competition at 18 in the 2017/18 group stage to become the second-youngest player in the club's history to do so. During the course of that campaign, he also got his first taste of Premier League and FA Cup action, whilst playing his part as City secured the league title and League Cup crown. Meanwhile, last summer, he was part of the team that claimed Community Shield glory.

Opening his account
This season, he netted his first goals in senior football, bagging a brace in a League Cup game against Fulham. Real Madrid fans know all about his goalscoring ability after he fired home a sweet strike against the Whites in the sides' meeting in Los Angeles during the 2017 pre-season campaign.

Spain youth international
The new Real Madrid man has also showcased his talents for the Spanish youth teams. He impressed for the Spain Under-17s in the European Championship in Azerbaijan in 2016, where he hit three goals, one of which came in the final, and was instrumental in seeing Spain take runners-up spot at the tournament. He has also featured for the Under-19s and the Under-21s. 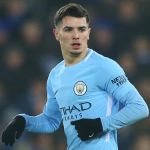