The Whites cut a nine-point deficit in the final quarter but Kirolbet Baskonia took the first point in the final.
WiZink Center

94
It was a match fitting of a final. The coaches hinted as much in the build-up and so it proved in the first clash of the League title decider. Real Madrid just failed to make the comeback happen, despite coming back from nine points down in the final quarter. Neither a wonderful Carroll (20 points, 14 in the final quarter), nor an impressive Llull (12) nor a dozen points from Doncic and Tavares were enough to pick up the first point in the final, which ultimately went the way of Baskonia. In less than 48, it's back to the WiZink Center for round two.

Real Madrid started the stronger but Baskonia sorted themselves out, looking strong from the 6.75, and began to take control of the scoreboard. The Whites benefitted from Tavares as he dominated the paint with real authority. He netted eight of the twelve points Laso's men scored from the inside in a tight quarter which saw the visitors edge just ahead (17-19).

Upping the level
The dynamic continued to favour the away side who put themselves seven up (24-31) halfway through the second period, when the Whites were without their beanpole Tavares, and Poirier really took advantage. Madrid kept going though, and Llull took up the mantle, before passing it to Carroll (two triples) and the record-breaker Reyes finished strongly. Laso's men were back in the game and drew things level just before the break with a fine Doncic drive in the closing seconds (39-39).

Voigtmann was inspired from the three-point line after the break, helping his side to pull away, before Doncic stepped up for a 7-0 run which put the hosts in front. It was a relentless battle, the scoreboard flipping this way and that, six times in all. Madrid looked to Tavares once more but a truly spectacular spell by Beaubois and two Janning triples took the visitors to +9 (58-67) just past the half-hour-mark.

Thrilling to the last
It was time to show some character. And the European champions did just that. Laso's boys upped the intensity at the back and Llull, Rudy and Carroll really upped their game. The Wyoming-born guard was unstoppable once more and Kirolbet Baskonia could do nothing as he netted from 6.75 and with free-throws to go to 11 points. Taylor completed the comeback from the three-point line having just entered the fray (81-79, min. 37).

The game was even once more and it was back to square one with just 2:15 to go. Shengelia broke the deadlock; Llull responded. Time was running out. Vildoza got it right with two free-throws but Ayón couldn't replicate it. Llull notched a wonderful triple to bring Madrid to within three points with just 8.1 seconds left on the clock (87-90). Voigtmann essentially killed the game with two further free-throws (87-92) but Carroll netted another three. They didn't let it slip and Beaubois made it 90-94 at the end. 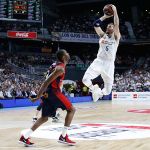