Florentino Pérez and the film's director, Ignacio Salazar-Simpson, attended the screening at the stadium.
The Santiago Bernabéu has hosted the premiere of the documentary. Bernabéu, a film about the man who was Real Madrid president for 35 years. Florentino Pérez and Ignacio Salazar-Simpson, the film's director, were at the screening of the documentary, which was presented by Movistar, and will be shown in cinemas starting this Friday, the 10th of November. The club's honorary president, Paco Gento, as well as former players, Amancio, Pachín and Santamaría also attended the event.

The lowest tier of one side of the stadium filled up with fans eager to learn more about the life of a legendary figure in Real Madrid's history, as they watched the film on five giant screens erected on the pitch. Based on a range of archive footage, the documentary looks at the development of Santiago Bernabéu and Real Madrid, from their beginnings through to the present day.

Salazar-Simpson: “Thanks to Real Madrid for their support”
Prior to the screening, Ignacio Salazar-Simpson addressed the crowd: “When we began our investigations into the life of Santiago Bernabéu, we were excited to discover the values and principles which led him to make the club what it is today. I would like to thank Real Madrid and Florentino Pérez for their unconditional support right from the early stages. Every department has helped us to finish the film and we're thrilled to be able to have the premiere here, at the Santiago Bernabéu”. 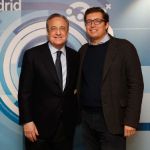