"The Real Madrid fans helped me win this trophy", said the Portuguese forward who won the award for the third time.
Cristiano Ronaldo continues to add to his legend. The Portuguese forward was named UEFA player of the year 2016/17 and received the trophy at the gala for the draw for the Champions League Group Stage held at the Grimaldi Forum in Monaco. The Real Madrid man beat Messi and Buffon in the vote to win his third award after those collected in 2014 and 2016. He is also the only player who has always been among the three finalists since the awards began in 2011.

The Whites forward had another great season, in which he scored 42 goals for Real Madrid, and stood out at the end of the season with great performances in decisive matches. Ronaldo was key on the way to winning la Duodécima with his hat-tricks against Bayern Munich and Atletico, as well as his brace in the Cardiff final. In domestic competition he was also central to winning LaLiga, scoring in the last three matches.

“Every year, the challenge is the same – to win everything, with my club and my national team. I’m so glad to be here and honoured to win this trophy again. I have to say thank you to my team-mates and also congratulate them. To the Real Madrid fans and everyone who has helped me to win this trophy", he said after receiving the award.

The jury of this award is made up of 80 club coaches who participated in the UEFA Champions League and UEFA Europa League 2016/17 Group Stage. With them, 55 journalists selected by the European Sports Media (ESM) group representing the different UEFA member associations. The prize recognises the best players during the last season, taking into account all competitions. 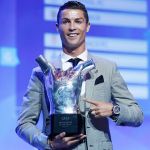