A Ronaldo brace and strikes from Benzema and Kroos handed the Whites victory in Vigo, leaving them now needing a point from their trip to La Rosaleda to secure the title.
Balaídos

4
Real Madrid, who were inspired by the exceptional Cristiano Ronaldo, tonight overcame the penultimate hurdle in their quest to claim the LaLiga title. The Whites collected three precious points against Celta in this rearranged Matchday 21 fixture to regain top spot and keep their title destiny in their own hands ahead of Sunday's last round of fixtures. Currently boasting a three-point advantage over Barcelona, a point in Málaga would see the Whites crowned champions.

Both sides made bright starts, although it was Real Madrid who fashioned the first chance of the night. With five minutes played, an off-balance Karim Benzema picked the ball up and got to the by-line but nobody was on hand to connect with his pull-back. This was a foretaste of what was to follow just five minutes later when Isco laid the ball off to Cristiano Ronaldo, who required just three touches to put the visitors into the ascendancy with a stunning strike from the edge of the area. The Portuguese attacker took one touch to control and a second to set himself, before unleashing a thunderous left-footed bullet which flew past the powerless Sergio Álvarez.

Chances
The Whites had now got their noses in front and Celta were looking for a route back into the game. Keylor Navas was called into action to deal with Jonny's long-range effort on 14'. As the minutes ticked by and before the half-hour mark, the visitors had the chance to built on their lead. A threaded Luka Modric through ball found Benzema on 26' and the Frenchman sent in a cross which Facundo Rocaglia turned behind for a corner with Cristiano Ronaldo lurking with intent.

As the two sides continued to trade blows, Iago Aspas saw his effort from the edge of the box in the 37th minute fly inches past the madridista post, before the final chance before the break fell to the reigning European Champions. Toni Kroos sent Benzema through on goal, but he was foiled by the hosts’ goalkeeper, who was able to smother the Frenchman’s shot from inside the area at the second attempt.

Cristiano Ronaldo double
The second half couldn’t have got off to a better start, as Madrid extended their lead inside the opening three minutes. A fine Isco through ball found Cristiano, who had timed his run perfectly, before beating Sergio with a sumptuous finish when through one-on-one. It was 2-0 to the visitors and both goals had come from Cristiano Ronaldo, who has now struck 13 times in his last eight appearances.

Benzema makes sure of the points
Celta were reduced to 10 men when Aspas was given his marching orders in the 62nd minute for a second yellow card. Nevertheless, the hosts continued to look dangerous and Keylor Navas had to stand strong in a one-on-one with Daniel Wass on 68 minutes. Just 60 seconds later, John Guidetti did infact reduce the deficit when his shot deflected off Sergio Ramos and left the visiting keeper with no chance. There were still more than 20 minutes to play, and the scoreboard now read 2-1 to the visitors, but Real Madrid produced an immediate response and killed the game off with a third of the night on 70 minutes. An excellent Marcelo assist was met by Benzema, who had done superbly to lose his man and turn the ball home.

From then on it really was one-way traffic in favour of the visitors. They could have scored again with 75 minutes on the clock when Cristiano Ronaldo was sent clean through. Just a minute later, Isco then forced Sergio into a wonderful save and the goalkeeper was in fine form once more in the 85th minute to keep out Modric’s effort from inside the six-yard box. He was left helpless in the 88th minute, though, as Kroos stroked the ball home with a trademark cultured finish after some fine build-up play. Real Madrid now just have one final hurdle to overcome in their pursuit of the LaLiga title and glory could be theirs in Málaga on Sunday. 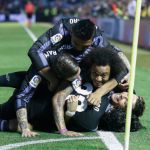