A goal from Óscar Rodríguez extra time gave the youth team the win over Málaga, as the Whites were a man down from the 31st minute onwards.

1
The Real Madrid Under-19s have won the Copa de Campeones after beating Málaga in the final. Despite being a man down from the 31st minute onwards after Martín was sent off, Guti's side did not lose their focus, they remained calm and dominated possession. Óscar Rodríguez scored the winner from a set piece in the 116th minute and gave the Under-19s their seventh Copa de Campeones.

Both team were slow out of the traps and did not create many chances. Maty had the chance to put Malaga ahead with a shot across goal. The madridista's then went on the attack as Alberto crossed in only for Kellyan to parry as Dani tried his luck with a shot. When Real Madrid were the better side, they went a man down as Martín was dismissed in the 31st minute following a second yellow. Despite being outnumbered, the Whites were certainly not outgunned as they went in search of a goal. Zabarte rifled in a shot which went over the bar.

After the break, Eppy had the chance to put his side ahead but was kept out by Belman. The Whites struck back mere minutes later. A great piece of play down the left from Franchu saw him go past two men, and send a pass in for Dani Gómez who was unlucky not to convert. The Whites dominated possession as the Andalusians looked to go on the offensive. Joel had two clear chances in the 66th and 81st minute to open the scoring, but the chances came to nothing.

Clear chances
Before going into extra time both team had one final rally each. First Málaga struck with a thundering shot that rattle the crossbar before going out, and then the Whites went on the counter and Manu Hernando took a shot which ballooned over.

Incredible goal from Óscar
The Whites did everything possible to avoid going to penalties. Fran García and Dani Gómez had the two clearest chances, but could not convert. With four minutes to go, Real Madrid went ahead. Óscar Rodríguez took a direct free-kick which flew into the net to make it 0-1. Real Madrid now have this Copa de Campeones win to add to their previous hauls, in the 1994/95, 1996/97, 1999/00, 2005/06, 2009/10 and 2013/14 seasons. 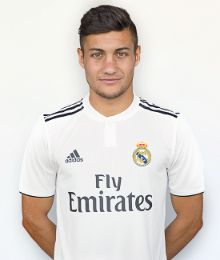