Goals from Bale, Cristiano Ronaldo and Morata turned the game around in less than half an hour after Villarreal had taken a 2-0 lead.
Estadio de la Cerámica

3
A lesson in belief from the league leaders. When all seemed lost, Real Madrid showed the character that has taken them to the top of the table, coming back from 2-0 down in the space of half an hour, after Villarreal had put themselves in a great position with 56 minutes played. You can’t ask for more from a team that believed they could win until the end and as a result remain in first place in the league.
Although there were no goals, the first half was end to end with both teams causing problems. The clearest chance for the visitors came in the 25th minute when Marcelo received the ball on the left wing and with two step overs he got past Mario to find space to deliver an excellent cross. Benzema met the ball with his head and forced a top save from to Asenjo, showing great reflexes when it looked like a certain goal.

More chances
The home side responded with two chances of their own. A cross in to the area in the 31st minute found Samu Castillejo, his effort from inside the six-yard box sailed over the bar. A minute later, Bakambu, starting out on the wing, came up with a moment of individual skill but his shot couldn’t beat Keylor Navas. The last chance of the first half fell to Real Madrid after a cross from Carvajal led to an acrobatic effort from Benzema that ended in the hands of Andrés Fernández, who had replaced the injured Asenjo.

The second half couldn't have got off to a worse start. There were just five minutes on the clock when Samu Castillejo headed the ball back to Trigueros, who volleyed home to put the hosts into the ascendancy. Things got worse for the visitors just six minutes later when Bakambu doubled the home side's advantage. Madrid would have to mount a comeback at the Estadio de la Cerámica and Zidane introduced Isco in place of Casemiro to give the side a greater attacking threat. Madrid nearly reduced the arrears on 61' when a stunning left-footed volley from Cristiano Ronaldo struck the upright.

Goals from Bale and Cristiano Ronaldo
The visitors were unlucky on that occasion, but three minutes later they did get themselves back into the game. Carvajal shaped in a cross and Bale leapt highest to power home a towering header. The score was now 2-1 and there was just under half an hour remaining. The Whites laid siege to Andrés Fernández's goal and their pressure paid on 71'. Kroos fired in a shot from the edge of the area and the ball ricocheted up off a defender and struck Bruno Soriano's hand. Cristiano Ronaldo stepped up to convert the resulting penalty and make it 2-2.

Morata completes the comeback
By this stage Madrid had done the hard part and they now poured forward in searching of a winner, which duly materialised on 83'. Marcelo swung in a cross and Morata, who had entered the fray just minutes earlier in place of Benzema, jumped highest to nod the ball home. It was a goal which evidenced the Whites' belief as they rounded off a stirring comeback. The youth-team graduate had the chance to have extended the visitors' lead but he fired over from point-blank range in injury time. This was a fine victory as Madrid hold onto top stop in what has been a demanding week. 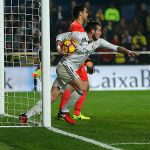