“We've made a good start in La Liga and the Champions League”, stated the Madrid-born striker.

Álvaro Morata, Lucas Vázquez and Nacho attended an Adidas event in Madrid which saw the three madridistas take part in a 3v3 game against the winners of a freestyle football tournament. The trio also spoke to the media to reflect on the latest from within the Real Madrid camp. Morata showed his ambition when talking about the objectives for the season: "At the moment, things couldn't be going any better for us. We're really happy because we've made a good start in La Liga and the Champions League. It's an important year for all of us and we want to go out and win everything going".

"At Real Madrid we've got the best players in the world. It's tough because we're players that play in attacking areas and we've got some fantastic players in those positions. Every time we take to the pitch we give our all, we fight for the club and that's important, it shows that it's not just all about the players that start the game. We're a team and it's important to keep putting points on the board".

Champions League goal
"When you're a kid you dream of scoring goals like that at the Bernabéu in this shirt and it was incredible. I've watched it back a few times, but it's in the past and I've now got to think about scoring and winning the next match and keep on working hard".

Lucas Vázquez: "We're on a very good winning run"
"Our work is focused on preparing for the games and trying to win them all. We're on a very good winning run and long may it continue. It's important that there's competition for places within the squad and to be sure that, regardless of who plays, they'll compete and put in a good performance. I hope that we keep it up and that things continue on like this until the end of the season".

Nacho: "At this club the focus is on trophies"
"It's true that because we haven't won the La Liga title in recent years, we're really excited about having a good season and winning it this year. At Real Madrid all of the competitions are important, and I say, come on Real, let's battle on until the end".

"For those of us who are part of it, ours is the best squad. We have great belief in ourselves. Real Madrid always has a very good squad, with exceptional players. We've have to continue on in the same vein and win each game. We must keep on battling away so that come the end of the season, this squad lifts some silverware. 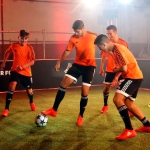