2
Real Madrid did everything in their power to see off Borussia Dortmund at Signal Iduna Park, but two moves in the dying minutes of both halves meant that they ultimately had to settle for a draw. The madridistas - who remain unbeaten in their competitive outings this term - produced a compact, high-tempo performance in which they displayed fine accuracy in their passing and broke swiftly on the counter, as the Whites claimed a result which sees them retain joint-top spot in Group F.

The visitors endured a tough start to the game, although they did enjoy the game's first chance on three minutes when Roman Bürki was equal to Cristiano Ronaldo's free-kick. From that stage on, and up until the fifteen-minute mark, the hosts piled the pressure on, but they came up against an intense and solid Madrid backline. A Gonzalo Castro free-kick and Pierre-Emerick Aubameyang looked to put the hosts into the ascendancy with efforts in the 4th and 12th minutes, but Keylor Navas, making his first appearance following his lay-off, was in inspired form.

A move to cherish
The European champions absorbed the hosts' pressure and drew first blood on 17 minutes courtesy of an excellent team move. The break started when Luka Modric sprayed a pass with the outside of his boot out wide to Karim Benzema, who was closed down by two defenders, the Frenchman left Sokratis Papastathopoulos grounded, before laying the ball off to Toni Kroos. The German midfielder then found James and he in turn slipped the ball to Gareth Bale, who played a backheeled pass to Cristinao Ronaldo for the Portuguese forward to round the move off with a first-time shot past Bürki.


The Whites were now ahead and controlling the game, but on the stoke of half-time, a moment of bad luck saw the Germans find an equaliser. A long-range free-kick was taken by Raphaël Guerreiro in the 43rd minute, Keylor Navas parried the ball straight into the face of Raphael Varane , and Aubameyang was on hand to poke the ball over the line. The European champions were about to be handed another huge slice of bad luck as they had a goal ruled out in time added on with Cristiano Ronaldo adjudged to be in an offside position.

More chances
The second half started at a blistering pace and the chances continued to flow. Aubameyang tried his luck from the edge of the area in the 52nd minute, only to be denied by a diving save from Keylor Navas, before Real Madrid responded. Sergio Ramos crossed nine minutes later and Cristiano Ronaldo sent his headed effort just wide. The Whites created another opening in the 66th minute when Kroos’ corner was met by Bale, who blazed the ball over the bar.

Varane’s first goal
Real Madrid were pushing for the goal and were rewarded with 68 minutes on the clock. Kroos took a short corner, Cristiano Ronaldo crossed to the back post where Karim Benzema was waiting. His volley struck the post and fell to Varane who took advantage to sweep home the loose ball. There were more than 20 minutes to go and Real Madrid knew that the more of the ball they saw, the less opportunities their opponents would have. Ronaldo had another opportunity in the 79th minute, when he followed a great cut inside with a left-footed strike which was parried behind by Bürki.

The final moments
Borussia Dortmund stepped up a gear in the final moments and were foiled by Keylor Navas twice in quick succession in the 83rd minute. The first was a strike from Christian Pulisic, who beat Ramos for pace, before a great effort from Emre Mor from the edge of the area. The Madrid goalkeeper couldn’t repeat his heroics in the 87th minute against an unstoppable drive from André Schürrle which saw the encounter end 2-2. 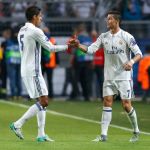