Nacho, Ramos, Morata, James and Mariano were all on target in the victory over Stade de Reims.
Santiago Bernabéu

5
3
Real Madrid opened the 2016/2017 season in front of their fans with victory to claim the 37th edition of the Santiago Bernabéu Trophy. Real Madrid and Stade de Reims served up a glut of goals in a fixture staged to mark the 60th anniversary of the first ever European Cup, which was won by Real Madrid. The hosts' goalscorers were Nacho, Ramos, James, Mariano and Morata, who notched his first goal since returning to the club.

Despite the Whites running out 5-3 winners, they were forced to stage a comeback, after the French outfit broke the deadlock with their first foray forward, courtesy of a drilled effort from Pablo Chavarría from the edge of the area. However, it took the madridistas just five minutes to restore parity, as Nacho glanced home a Toni Kroos corner on 11 minutes.

Aerial domination
The play was concentrated in the Stade de Reims half during the first period, as the home faithful revelled in seeing the new members of the squad in action. Marco Asensio showcased his audacious talent on several occasions, whilst Álvaro Morata came close to scoring on 27 minutes, but he was ultimately unable to finish when one-on-one, however the forward would later manage to get his name on the scoresheet. The French side's goalkeeper made several worthy saves to deny James and Marcelo, although he was helpless to prevent the Whites from completing the comeback before the break.

Zinedine Zidane's charges dominated on set pieces throughout and the second goal also came from a corner, as Kroos claimed another assist after Ramos headed home to make it 2-1 on 39 minutes. Right on the stroke of half-time, Morata extend the Whites' advantage with another headed effort, this time from a Marcelo cross.

Four goals in the second period
Just as they had done in the first half, Stade de Reims found the net with their first attack of the second period. This time round it was Rémi Oudin who capitalised on some misfortune in the Real Madrid backline to fire past Kiko Casilla in the six-yard box. It didn't take long for the Whites to react, with James making it 4-2 on 60 minutes after his initial effort had been parried by the goalkeeper.

Spirited Stade de Reims display
There were still two further moments of excitement to come in this tribute game. First up, the visitors once again reduced the deficit through Grejohn Kyei's  72nd-minute close-range header, before Mariano made it 5-3 to round off the scoring for the night. The academy graduate latched onto a sublime pass in behind from Mateo Kovacic to prod the ball home.

The final test
This victory sees Real Madrid add to their collection of Bernabéu Trophy triumphs to make it 26 wins and claim their eleventh in a row. This success also sees Zidane's men register their fourth win on the bounce. Real Madrid's next outing will be their first competitive fixture of the campaign, as the Whites travel to Real Sociedad in their La Liga opener (Sunday 21 August 8:15pm CEST). 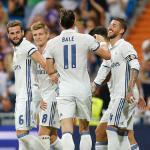