The fans filled the stadium to experience the celebration of la Undécima with the players.
Real Madrid won their eleventh European Cup in Milan. Zidane's men were able to count on the fan who supported them and believed in the team in every moment, and a day after winning the title, the fans filled the Santiago Bernabéu to make some noise and enjoy the party along with the players.

After the support received in Milan and at Cibeles, the madridistas didn't want to miss the opportunity to thanks their team for the tittle that they had won and the celebrated the Champions League victory alongside the players and the technical team. The event was presented my Miki Nadal while out on the pitch there were four gigantic screen in the centre circle surrounded by enormous balloons representing the 11 European Cups.

‘You are part of la Undécima’
The celebration began with the stadium in darkness. Images of the 11 European Cups were seen on the screens. Zidane was the first to be presented, appearing on the pitch under a spectacular light show, shadows and a curtain of water.

The Frenchman was followed out by Rubén Yáñez, Danilo and the technical team, before the rest of the team in reverse order of their shirt number: Isco, Jesé, Modric, Lucas Vázquez, Arbeloa, Kovacic, Carvajal, Casemiro, Casilla, Marcelo, Bale, James, Benzema, Kroos, Cristiano Ronaldo, Nacho, Pepe, Varane, Keylor Navas and the captain Sergio Ramos with la Undécima in his arms.

Surprise
This was followed by the squad lifting the cup in to the Madrid sky to fireworks and with We are the Champions playing in the background. Minutes later and the surprises began: the new hymn for la Décima, performed by Plácido Domingo with images from the road the Whites had been down on their way to la Undécima.

Lap of honour
The moment when the players, one by one, thanked the fans with messages from the centre of the stage was emotional. This was followed by the madridistas doing a lap of honour around the pitch presenting the trophy to the fans. The players showed their joy as they shared the moment with their children and the technical team. The event was concluded with a big photo of everyone. 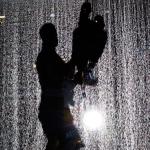