The heroes of la Undécima arrived at the fountain at 7:30am, after following a parade route from the stadium, along which they received a continuous show of support from the fans. In the plaza, the traditional party atmosphere was aided by music and a lights show. The message, Gracias madridistas "Thank you, madridistas", was also projected on to the Town Hall.

Arrival at Cibeles
The players' bus, adorned with the slogan: “CAMPEO11ES, LA U11DÉCIMA” was welcomed by the chanting fans. The players then took to the walkway erected above the fountain to thank the fans for their constant support on their way to winning this latest Champions League.

Ramos presented the trophy
The celebrations peaked when Sergio Ramos draped a Real Madrid scarf and flag around the trophy, and presented the European Cup, high above Cibeles. The breaking dawn in the centre of Madrid served as a new historic image to remind us that la Undécima is ours. 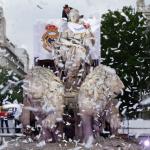