Ramos' goal saw fans erupt into joy and Cristiano Ronaldo's winning penalty sent supporters into a state of euporhia.
"Together nothing is impossible" read the four giant screens in the centre circle of the Santiago Bernabéu pitch just minutes before kick-off, and the slogan ultimately rang true. Almost 80,000 people were in attendance to toast La Undécima, just as if they were there in the San Siro along with the players. The evening started out with chants of "Let's go for the Undécima" and ended with "Let's all go to Cibeles".

What was set to be yet another historic final for Real Madrid got underway to chants of "Madrid, Madrid". The first outburst of joy came on 15 minutes when the captain headed home at the San Siro, roared on the faithful back at the Santiago Bernabéu, as rapturous chants of "Ramos, Ramos" circled around the stadium.

Ramos chants turns to support for Keylor Navas
This joy turned to suffering at several points throughout the final, whenever the opposition closed in on Keylor Navas' goal. Whilst in the first half Sergio Ramos' name was the feature of the chants, in the second period, it was the turn of the Costa Rican goalkeeper, as the faithful backed him to deny Griezmann from the spot. Up went chants of “Keylor, Keylor”, the very same chants that have been heard on several occasions throughout the season. 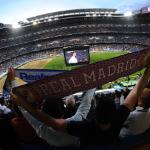