Goals from Benzema, Lucas Vázquez and Modric sealed victory for The Whites against Villarreal.
Santiago Bernabéu
3

0
Real Madrid once again showed that they will fight for La Liga until the end. In a serious game in which they showed authority, The Whites orchestrated a goal fest against Villarreal and racked up their eight win in a row in the competition. With four games left to play, they remain one point behind Barcelona and Atlético Madrid.

Despite Real Madrid dominating possession and creating some dangerous plays, the first goal took it's time arriving. The Whites had two clear chances before scoring. Benzema combined with Modric in the 8' and the Frenchamn's shot ended up in the hands of Asenjo. The next chance arrived a few minutes later. Modric was again involved, picking up the ball out on the right and played it on with the outside of his boot. Lucas Vázquez's shot with his left did not hit the target.

The first goal
The home side's aims were becoming clearer and clearer and Villarreal, looking withdrawn and unable to overcome the pressure from The Whites, were limited to waiting out the minutes in the hope of half time arriving. The visitors were unable to see this through and in the 41’ Benzema was the embodiment Real Madrid's superiority. Cristiano Ronaldo crossed in, Asenjo cleared and the Frenchman, who was well prepared, found the back of the net with his head. There ended the first half.

They kept up this approach in the second half. Real Madrid attacked and dominated against Villarreal, who were not accurate in their passing, tried to catch The Whites on the counter attack. Despite this, the game remained very much alive. That was, until Lucas Vázquez extended Real Madrid's lead. The Youth teamer combined with Benzema, ran quickly past two rivals on the right wing and fired past Asenjo in the 69’ with a powerful strike that went in off the post. It was the third goal this season for the youth teamer, who also made it Real Madrid's 100th this season in La Liga .

Modric
His goal put the home side at ease, seven minutes later extending the lead with a great goal. Benzema received the ball with his back to goal and picked the right moment to pass to Danilo who was running on. The Brazilian only needed two touches: one to take the ball over onto his right foot and the other as precise as it was intelligent to assist Modric, who scored with his left without the ball hitting the ground. It was a great goal that rounded up the goal fest and the eighth win in a row this season. On Saturday the next cup final in La Liga awaits in Vallecas. 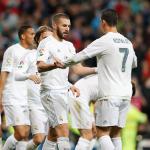