"We're witnessing a unique, exceptional footballer. He's the only player to have won four Golden Shoes and he's a giant of the game", said Florentino Pérez.
In a ceremony at the Westin Palace hotel in Madrid on Tuesday, Cristiano Ronaldo picked up the fourth Golden Shoe award of his career, his third as a Real Madrid player. The Portuguese star, who scooped the accolade after scoring 48 goals in La Liga last season and is the only footballer to have won it on four occasions, was accompanied at the event by president Florentino Pérez, Whites coach Rafa Benítez, Portugal boss Fernando Santos, several members of Madrid's board of directors and the club's director of institutional relations, Emilio Butragueño.

"It's a wonderful moment in my sporting life. Receiving my fourth Golden Shoe is an honour and a real privilege. This trophy is really important to me, and I’d like to thank my team-mates because, without them, it wouldn't have been possible. Ever since arriving at the club it's been important for me to think big", said Cristiano.

"I always want more. I know I’m the only player to have four, but I want more. That means winning trophies with the greatest club in the world. This year will be no different, and we want to win La Liga, the Copa del Rey and the Champions League. I hope we see each other here again next year. It makes me happy that my son and my mother can watch me receive these types of awards. It's a special moment".

Pérez was on hand to present the Golden Shoe to Real Madrid's all-time leading marksman: "We're witnessing a unique, exceptional footballer. He is the club's highest ever scorer and today we are here to celebrate his fourth Golden Shoe. He's the only player to have won four and he's a giant of the game. For everyone connected to Real Madrid, it's an honour and a privilege that he is indisputably a legend of world football".

New challenges
"He is making history at a club that has won 10 European Cups, but he still has much more to give. There's something very special about him that makes him the best player in the world, and that's that he never allows all these prizes to let him fall into complacency. That is right in line with the hallmarks of Real Madrid".

"He is a member of an exceptional squad that not only admire him, but also love and respect him. All this is a starting point towards new challenges. Thank you for all you have given us and the moments of happiness you are yet to bring us".

Cristiano Ronaldo also claimed the Golden Shoe in the 2007/08, 2010/11 and 2013/14 campaigns. The accolade recognises the top scorer across European league football each season, and is awarded by European Sports Media (ESM), an association formed by Europe’s leading publications in the world of sport. 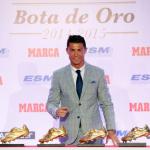