The Costa Rican goalkeeper had an outstanding World Cup in Brazil, taking his side to the quarter-finals for the first time in their history.
Keylor Navas (San Isidro, Costa Rica, 1986) is now a Real Madrid player. After being one of the stars of last season, he later showed the world his immense quality at the World Cup. His saves took Costa Rica to the quarter finals for the first time in history, consolidating himself as one of the best keepers in the world.

He is quick, has great reflexes, always positions himself well and is one of the best in one-to-ones; Keylor Navas has everything it takes to be an exceptional keeper. He demonstrated it in Brazil, where he only let in two goals in five matches and nullified teams such as Holland, England and Italy with his shot-stopping. Having won three man of the match awards, he was a candidate for the Golden Glove at the World Cup.

His breakthrough season
His true arrival came last season: he made more stops than any other keeper in La Liga (160) had the greatest percentage of saves of anyone who played more than five matches (80.1%). Having conceded 39 goals in 37 matches, he helped Levante finish the season in fifth place on the table for the fewest goals conceded, only behind the four Champions League teams.

Before arriving in Europe, he took his first steps as a player at Deportivo Saprissa in Costa Rica, where he won two league titles, two winter and two summer championships, as well as a CONCACAF Champions Cup. In 2010 he signed for Albacete and, after an outstanding season there, he moved to Levante. At 27 years of age, and after being the hero of the World Cup’s surprise package, he arrived at Real Madrid to provide even more steel to the European champions. 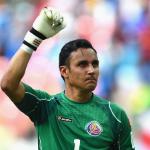