The Whites overcame Sevilla 2-0 through a brace bagged by an unstoppable Cristiano Ronaldo.

Any fan could have predicted everything that happened at the Cardiff City Stadium before the starting whistle. On 12 August Real Madrid played in the final of the European Super Cup after winning the Tenth against champions of the Europa League, Sevilla C.F. In Bale's native land, Ancelotti's side, through an imperious Cristiano Ronaldo, who bagged a brace, overcame the Seville team, lifted the second European Super Cup in the club's history and demonstrated their supremacy to the whole continent. "We won the title for the fans; they're always behind us and it's a very special time to celebrate", said the Portuguese striker after the game.

The European Super Cup is one of those titles that every fan wants their team to win to start the season in the best possible way. And if it was a special night for all Madrid supporters, it was even better for the Whites' new signings. Kroos and James made their official debuts wearing the white shirt. And they could not have got their spell at Madrid off to a better start. "I hope it will be the first of many titles", said the Columbian midfielder.

Cristiano, man of the match

In the final of the European Super Cup, the current Ballon d'Or holder once again showed why he is the best player in the world. Because Cristiano Ronaldo always delivers in the important fixtures. The Madrid striker scored the two goals that dispatched Sevilla and enabled Ancelotti's team to lift the first title of the season. He also claimed his 70th goal in Europe. "His performance was excellent. He was man of the match and he finished two fantastic goals", said Ancelotti on the Portuguese forward.

After Casillas lifted the coveted trophy and the players and coaching team celebrated the victory on the field with the Whites fans who had travelled to Cardiff to support the side, the party continued in the dressing room. After the toasts and hugs, all the squad members were photographed with the Super Cup. And quite right too. As the club chairman, Florentino Pérez, said: "It's Real Madrid's history, and we have prepared during this pre-season with that dream".

Real Madrid started the season as they finished the previous one: with a European title that is now in the Whites' club museum, so that all Madrid fans can enjoy the team's historic second European Super Cup. 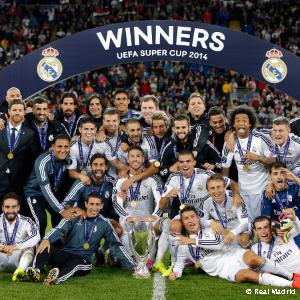 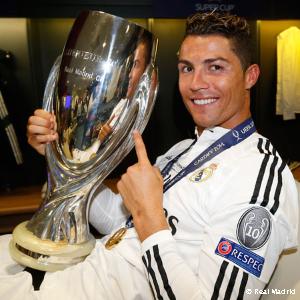 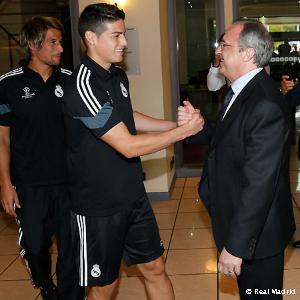