The midfielder will be at the club for the next six seasons.
Toni Kroos ya es jugador del Real Madrid. El centrocampista alemán firmó el contrato que le unirá al clubToni Kroos is now a Real Madrid player. The German midfielder signed a contract that will tie him to the club for the next six seasons. The president, Florentino Pérez, and the members of the Board of Directors welcomed the Whites player to his new home. After signing, Kroos received a replica of the stadium, a watch and a shirt with his name and the number eight on the back. 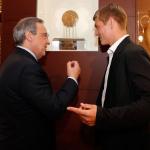