"The recognition of all for his figure has allowed us to show his true greatness", said the Real Madrid president.
Florentino Pérez spoke to the media at the Royal Box of the Santiago Bernabéu stadium. He did so alongside Ignacio Di Stéfano to thank the gestures of warmth from all over the world following the passing of Alfredo Di Stéfano: “These last few days have been full of emotion. They have been very sad and deeply painful. The most difficult thing for someone is to carry on without someone you love. It won't be easy for his family, for me and for Madrid fans to get used to living without him.  Without this exceptional man in every way”.

“We are comforted to know that his memory will live eternally and he will help us in the right direction. Because Alfredo Di Stéfano was much more than a historic footballer, he was a huge part of this club, and his impact changed and revolutionised football. They have been difficult days for his family and for all of us, but I have to tell you that I’ve never been prouder to have had the honour of being close to him and to have been his friend”.

“The repercussion, recognition and worldwide respect that we have been able to feel for him and his memory throughout these days has allowed us to show the true dimension of Alfredo Di Stéfano. A universal player who broke down barriers all over the world”.

“I want, as president of Real Madrid, to express my complete gratitude. My speech here is one of infinite thanks. Many thanks to all who, from all over the world, have had memories and warm words for this giant of the footballing world. Thanks to all the players and teams that have remembered him. Thanks to the clubs, presidents and directors who have accompanied us here, or from a distance”.

“Rival clubs on the pitch have shown their greatness in these past few days by recognising our legend. Thanks to these incredible footballers who have offered their thoughts and to the followers who have accompanied us in giving him the last goodbye”.

" I wanted to give a special mention to his majesty King Phillip VI. His presence at the chapel just goes to show the magnitude of what Alfredo Di Stéfano meant in the life of many Spaniards, when this country was going through a very hard time”.

“Also to all of the institutions and organisations that have sent their condolences and support. And to all representatives from political, judicial, cultural, economic and social life of this country, who have accompanied us in these days. My special acknowledgement, and that of his family too, to the Community of Madrid, and its president, the Madrid City Council and its mayor”.

“Thanks too, to the professionals of Samur, the leaders and staff at the Hospital General Universitario Gregorio Marañón. Especially in the cardiology department, for their impeccable professionalism and for the care they showed to our Honorary President”.

"I also want to thank the work of all mediums of communication, who have made the last goodbye for the universal and unique figure that was Alfredo Di Stéfano possible, and allowed it to be felt all over the world. You have done an extraordinary job, with immense sensitivity, and both the family and I myself feel emotional and are deeply grateful”.

“Finally, I want to also highlight the enormous effort of Real Madrid’s employees. For them they were sad days, and without doubt they have given their best in order to say goodbye to out Honorary President. Today Alfredo Di Stéfano would feel proud. I also have to remind you, that as a Madrid fan each and every one of the fans that have come to Bernabéu to pay their final homage and write words in his memory have filled me with emotion”.

“Many of them didn’t see him play, but were evidently conscious of the universal transcendence that Alfredo Di Stéfano had on Real Madrid and the world of football. Alfredo Di Stéfano forms part of our badge. As you know, the last match he watched, of his Real Madrid, was loyal to his winning and never say die spirit, which defines us above all”.

“He was able to take another European Cup, and as the Décima song says, now runs The Arrow. An Arrow that will run with Real Madrid for eternity. Many thanks to everyone, and goodbye Alfredo”.

Ignacio Di Stéfano: “Thanks to everyone from my heart”
“These days we’ve been greatly affected and we can only say thanks. Even though in the last few months my father’s health had been deteriorating, he still shone and was happy. A few days ago he celebrated his 88th birthday surrounded by friends and family. His desire, and ours, was  to continue to share happiness together in a family that continues to grow and protect the values transmitted by my father”.

“In the name of my family I want to show my thanks, before anyone, to Real Madrid and their president Florentino Pérez. Not just for allowing my father to have a homage at the place that was his home, but also for allowing him to lead an extraordinary life. For him it was a huge sense of pride to be Honorary President of Real Madrid”.

“My father will take the love of everyone with him forever, and this makes the whole family happy. What he loved the most was Real Madrid and football. He loved this club, and the ball above everything else. Without doubt, today he would be proud that he will remain in the hearts of a lot of people forever, and that everyone knows what he meant”.

“Now he is accompanying my mother and my sister, and from up there he will give us all strength to carry on fighting for our dreams. They have been hard times, but thanks to everyone from my heart, and especially to the Madrid family”. 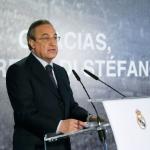