Hundreds of thousands of fans turned out to celebrate the Décima with the players.
For Madrid fans, their tenth European Cup tastes all the better because of the way in which the match was won. They had to suffer, but the team ended up lifting the Champions League trophy. After the final whistle, the supporters turned up en masse at Plaza de Cibeles for the traditional celebrations, this time for the title the club coveted the most.

Hundreds of thousands of supporters accompanied the players on the road and at the plaza in a party that lasted until after six thirty in the morning and that culminated with the arrival of the team. The music blaring from the speaker system and chants from the fans provided the entertainment as they waited for the arrival of the players. “Así, así, así gana el Madrid” ("That is how Real Madrid win") and “Sí, sí, sí, la Champions ya está aquí” ("Yes, yes, yes, the champions are here") were among the chants from the euphoric fans.

Giant shield
The scarves, shirts and flags, together with the special lighting on the plaza, provided a colourful backdrop for a historic celebration. The main façade of the City Hall was emblazoned with a moving Real Madrid shield and two messages: “Thank you Madridistas” and “Campeones”.

Shortly before six O'clock in the morning the squad arrived in an open-top bus with ‘Campeones, la Décima’ on the side. The time seemed not to matter, Cibeles was packed to the brim. The players began to climb the platform around the Diosa. There, they jumped, chanted and soaked up the affection of the supporters who were essential to the conquest of the Décima.

Ramos adorns the Diosa
This time, the captain, Iker Casillas, gave Sergio Ramos the job of crowning Cibeles. The vice-captain showed off the Champions trophy to the thousands of fans and draped the flag over the statue.

It was the high point of the celebrations. With We are the Champions providing the soundtrack and the light returning to the Madrid sky, an unforgettable night was brought to an end. The best team in the world are the kings of Europe once again. Tonight the party goes on. 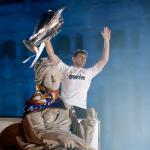