A double from Bale an one each from Cristiano Ronaldo, Carvajal, who scored his first goal for the club, and Morata sealed the win against Rayo at the Santiago Bernabéu.
Santiago Bernabéu

0
"We need to react”, said Ancelotti to the press the day before the game against Rayo. His side did not disappoint on a wet night: it was a goalfest four days before the visit of Borussia Dortmund to the Bernabéu.

The first goal came after 15 minutes, although The Whites might have been ahead sooner following a Benzema one-on-one after three minutes, plus a miscued clearance by Arbilla from a Coentrão cross which almost went into his own goal. Bale cut inside and played in Cristiano Ronaldo, who received the ball, cut inside the area at full speed and beat Rubén with a shot across goal.


Despite having deserved it sooner, Real Madrid had to wait until after the break to double their advantage. It was a surprise scorer who popped up in the 55th minute. Bale crossed from the right, Cristiano Ronaldo took the ball down with his back to goal and layed it off to Carvajal, who beat Rubén with a left-footed effort. It was the academy graduate's first ever goal for Madrid.

Four goals in an outstanding second half
Bale, who had come close to scoring in the first half, scored the third. The counterattack was started by Cristiano, continued by Di María and finished by the Welshman in the 68th minute. Two minutes later Bale grabbed his second. Pepe headed a Trashorras corner away, and the ball fell at Bale's feet, he ran from the edge of his own box, shaking of Rat and smashing in from the edge of the box.

That wasn't the end, either. Morata, who had come onto the pitch in minute number 73 for Benzema, produced a work of art five minutes later. The academy graduate collected the ball and curled the ball into the far corner with his right foot, past a hapless Rubén. Five goals for, none against is just the injection Madrid needed four days before the visit of Borussia Dortmund. 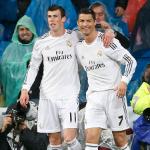