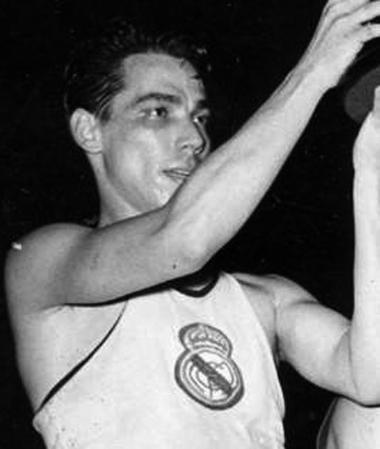 The man who brought the jump shot to Spanish basketball

Pedro Alfredo Borrás Blasco, known as Freddy Borrás, was one of the first truly great players in the first years of Real Madrid. He was born in Puerto Rico and came to Madrid to study, although as soon as he arrived in the Spanish capital he signed for the Real Madrid basketball team. He played for the club from 1948 to 1954, as a player in his first year and then as a player coach.

Borrás was a 1.90 m tall power forward who stood out for his intelligence on the court and his perfect individual technique and is considered to be the man who introduced the jump shot to Spanish basketball. “In the summer of 1950, I was in New York and that’s where I first saw the jump shot. When I came back, I started to use it here and it really surprised everybody”, said the Madrid player, who would also become the mentor of Pedro Ferrándiz.

As a player, he won one Championship of Castile (1949) and as a player-coach he won three more, three Spanish Championships and one Latin Cup. Although he was a Puerto Rican, he also made international appearances for Spain. He played in the first World Cup for the national team (1950) and also won a silver medal in the first Mediterranean Games.