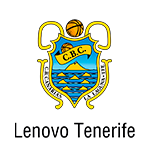 Real Madrid were unable to get the win on their visit to Lenovo Tenerife.

Real Madrid were defeated by Lenovo Tenerife in the round 27 league match as our team's run of eleven consecutive away wins came to an end after being in the lead for 30 minutes, but a poor last quarter, during which they went down 31-16, denied them the win. The top scorers for Laso's team were Llull and Yabusele with 13 points each, while Tavares recorded the highest PIR with 19. Focus switches to next week's EuroLeague match, when we host Bayern Munich with second place in the regular season at stake (Friday, 8.45pm CET).

Both teams were busy defensively at the start of the game, as Madrid came out on top in a first quarter that saw them barely make any concessions, superior on the rebound and reducing Lenovo Tenerife's shooting percentages considerably. With eight points from Llull and another five from Heurtel, Madrid's attack kicked on as the minutes went by, opening up a +8 lead at the 23' mark. With the score at 16-24 the home side hit back, spurred on by three-pointers from Wiltjer and Todorovic and Shermadini's appearance, but our team held firm in defense with Causeur, Madrid's best player in the second quarter scoring 7 points, responsible for counteracting Tenerife's drive in order to go into the break 4 points up (28-32).

The pace picked up in the second half and Madrid adapted perfectly. They kept their concentration and stepped up their level on defense, with Tavares standing out in the third quarter. The man from Cape Verde was like a brick wall, blocking his opponents on five occasions and beating his opponents on the offensive rebound. Laso's team started to built their dominance on the paint. Lenovo Tenerife's defensive solidity was broken down by Causeur and Yabusele, who put together a 10-2 run to take a 12-point lead at 30-42 in the 26th minute. There was still plenty of time left but our team ran out of steam in the final stretch of the quarter, allowing the home side back in thanks to Sulejmanovic's energy (41-43, min.30).

A lack of success in the key moments
Lenovo Tenerife started the final quarter stronger and turned the score around against a Madrid team that looked to Llull to try to contain the home side's surge. This time, however, the comfortable shots were not going in and the defense wasn't working. The opponents, with a run of three straight three-pointers, got a confidence boost and turned the game in their favor taking a lead of more than 10 points. Our side attempted but showed more heart than accuracy as Tenerife got the win (72-59, min.40).