"Today you wear the Real Madrid jersey, you will defend the values that have shaped our destiny", said president Florentino Pérez.
Eduardo Camavinga was unveiled as a new Real Madrid player. The official presentation took place at Real Madrid City and kicked off with the screening of a video featuring some of the player's best footage. The president Florentino Pérez then took the floor: "The club would like to welcome today a young French player who I firmly believe will display his talent, his strength and his desire to improve. I know that today Real Madrid fans are going to warmly welcome the arrival of this footballer who, together with his family, has worked hard and done everything possible to realise one of the biggest dreams of his life".

"At just 18 years of age, you will wear the Real Madrid jersey for the first time, one of the most admired and respected clubs in the world, the club that has won 13 European Cups. The club that asks for maximum commitment and maximum dedication. As of today, you will be defending a badge that has the greatest trophy cabinet in the history of football, but which also represents a set of values forged by our 119 years of history and with which millions of people in every corner of the world identify".

Camavinga playing at the Santiago Bernabéu
"Football is returning to the Santiago Bernabéu stadium. It's very exciting to say this after everything we have been through during these sad and strange times. Eduardo, this Sunday you will be at the Bernabéu as from now on you have the responsibility of being part of this legendary club".

"You will not be alone in your career here. You will have our fans behind you in every match. Their strength and support will be with you on this journey. They are the reason and the driving force behind everything we do. We have experienced and continue to endure a painful and very complex time. The pandemic has so far prevented us from being with our fans, but we will gradually get back to normality".

Signing the contract
Before the unveiling ceremony, Camavinga signed his new contract for six seasons alongside Florentino Pérez. After the signing, the Frenchman received a watch, a replica of the Santiago Bernabéu and a jersey with his name and the number 25 shirt. 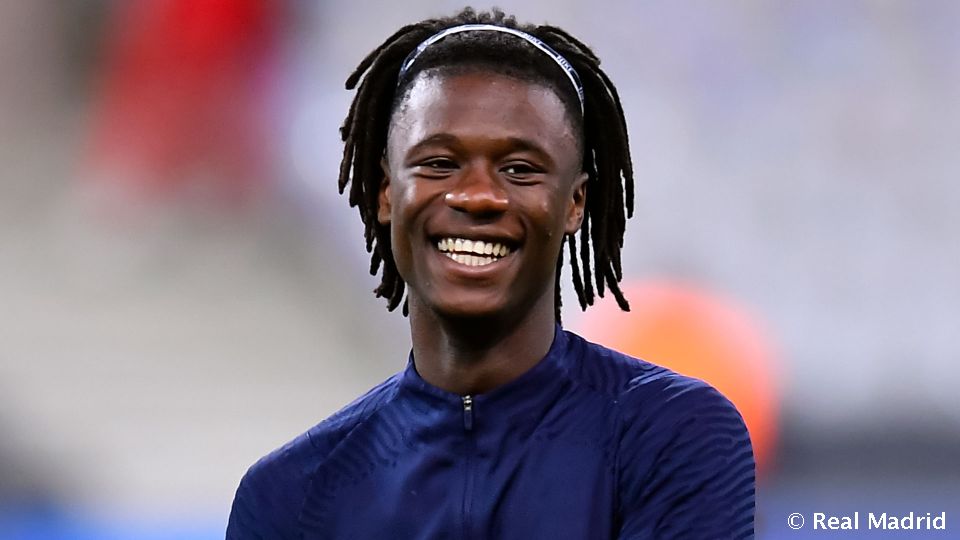 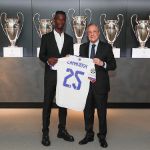